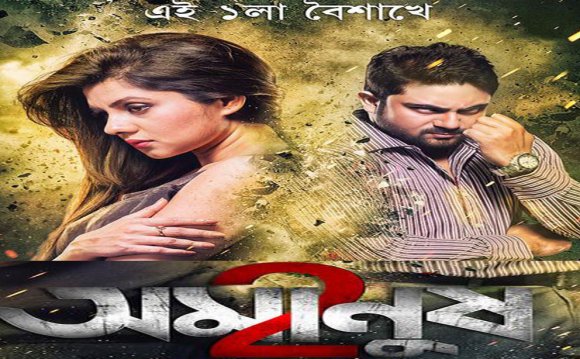 Amanush (also spelt as Amanus ; English: The Inhuman) is a 2010 Indian Bengali-language drama film written and directed by Rajib Biswas, starring Soham Chakraborty and Srabanti Malakar in lead roles, whilst newcomer Rehaan Roy, Saswata Chatterjee play supporting roles. The film, which has music scored by noted musician Jeet Ganguly and cinematography handled by Kumud Verma, released on April 2010. The film is officially a remake of the 2003 blockbuster superhit starring Dhanush and Sonia Agarwal, respectively. This film was already remade in Bangladesh as Anya Manush in 2004.

The story explores the mind of a youth who is mentally and physically abused in his childhood. The lack of a mother's love haunts the protagonist throughout the film as the girl of his infatuation parts him in her death. Turning into a psychopath, he desperately tries to woo his newly found lady love and his efforts culminate in a superb nail-biting cliffhanger.

Vinod (Soham Chakraborty), who orphaned at an early age, has grown up under the care of a church father, Father Rozario (Nagesh), in North Bengal, is an introvert but a genius. He is forcibly sent to college by Father Rozario but is a complete misfit in class. One day he solves a complex mathematics problem in class surprising his classmates. Though shunned by the rest of his class, Ria (Srabanti Chatterjee) becomes his friend and he gradually warms up to her too. His feelings soon turn into love but he realizes that Ria considers him as only a friend. But he is unwilling to let her go. Meanwhile Vinod learns that Ria is in love with another classmate, Aditya (Rehaan Roy).

Ria's father is angered on learning about her love. He shuts her up and prevents her from contacting anyone. But Vinod comes and meets her on the pretext of getting some old clothes for himself to wear. Pitied by Vinod, her father allows him. But Vinod uses the chance and escapes with Ria. He convinces her that she will meet Aditya.

Vinod has set up a secret place for executing his plan of wooing Ria. He makes her stay with him, while convincing her by talking about the never-impending Aditya's arrival. On one such day, he reveals his miserable past, where he is made to work for paid labour after being orphaned at an early age. He revolts against the oppression one day against the illegal child labour in vogue at his place. Promptly he is beaten black and blue for his profanity. Moreover he also loses his girlfriend to rapists in that place, who also kill her. Somehow he manages to escape from them and seeks refuge in the place of Father Rozario.

Ria is really touched by his past. Incidentally the police and Aditya arrive at the place. While Vinod was away to get some food, they try to make Ria understand that Vinod was a psychopath. Yet Ria scoffs at their claims, citing his gentlemanly behaviour over the days she was put up alone with him. Vinod, learning that the police have arrived at the scene, begins to indulge in mass violence. He opens fire, killing a police constable. Forcing them out of their hideout, he manages to evade the police Inspector and Aditya and successfully brings Ria back to their original place of stay.