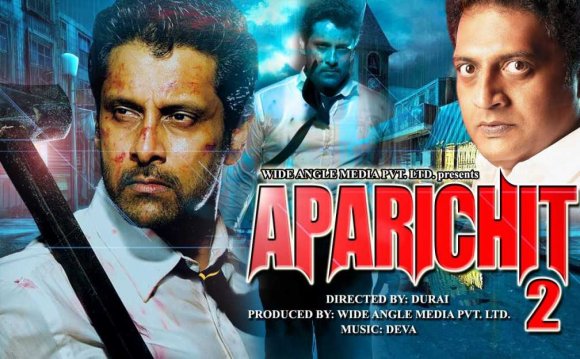 Certain directors belong to an altogether different league. You may like their films. You may hate their films. But you can never ignore their films. Acclaimed director Shankar belongs to this club. That's one of the reasons why you await his new outing APARICHIT - THE STRANGER with bated breath.

But the problem with APARICHIT - THE STRANGER is that moviegoers in Bollywood have moved past themes that depict a common man's battle against the dishonest, corrupt lot. In fact, it wouldn't be wrong to state that the film bears an uncanny resemblance to Shankar's own NAYAK [Anil Kapoor, Rani Mukerji].

The protagonist in both NAYAK and APARICHIT - THE STRANGER wants a change, to do away with the corrupt and corruption. The difference lies in the path that both adopt to fulfill/achieve their goals/desires.

APARICHIT - THE STRANGER is the story of Ramanujam alias Ambi [Vikram], called as Rules Ramanujam as he goes by the rule book. A lawyer by profession, he reacts to people who break the rules like disobeying traffic rules, not helping people in distress, eve-teasing in transport buses, spitting on roads, not providing standard meals in trains and so on…

His good intentions and proper approach do not take him anywhere. He is a stickler for rules and that does not always work. His father Parthasarathy [Nedumudi Venu] keeps advising him that he cannot change the world single-handedly. He gets shattered when he realizes that his childhood friend and now a medical student Nandhini [Sada] refuses his love.

He comes across a website aparichit.com which follows the Garudapuranam, the Hindu folklore which is similar to the Christian judgment which reveals that those who commit misdeeds will be punished in hell according to the degree of their deeds. And Ambi takes the avatar of Aparichit. He kick-starts a process through which he starts punishing the wicked people on earth. In the meantime, there is another character Remo, a ravishing supermodel, who tries to cajole Nandhini and she falls head over heels in love with him. Remo is none other than Ambi.

One day, on seeing Nandhini cheating the income tax people, Ambi transforms to Aparichit and attempts to kill her. Realizing that something is wrong with Ambi, Nandhini takes him to a psychiatrist [Nasser], who discovers that Ambi suffers from Multiple Personality Disorder [MPD]. In a split second, Ambi transforms into Aparichit and then to Remo much to the surprise of the doctors and Nandhini.

Amidst all this drama, an untiring policeman Prabhakar [Prakash Raj] gets down to track all the killings and the mystery behind them. Whether the police manage to nail Ambi forms the climax.