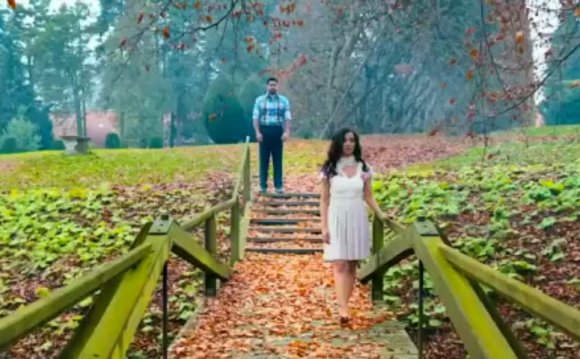 1920Is a 2008 Indian Horror film written and directed by Vikram Bhatt. Filmed in Hindi, the film revolves around the events surrounding a married couple living in a haunted house in the year 1920. The film stars debutant actors Rajneesh Duggal and Adah Sharma as the married couple. The film was a critical and commercial success. The film was also dubbed into Telugu as 1920 Gayathri. A sequel was also released to mixed reviews and commercial success in 2013.

In the year 1920 at Palampur, India, an architect arrives at a large manor house. The manager of the mansion, MK, discusses how its owner wishes to have it torn down with a hotel constructed in its place. Later that night, the architect is killed by a mysterious force. It turns out the first architect who had come before him was also killed in a similar manner some time ago.

Now the third architect who is brought in, Arjun Singh, is a religious, true devotee of lord Hanumaan and devoted to his family; but he is also in love with Lisa. This meets strong disapproval from his family because Lisa (born of a British father and an Indian mother) is of mixed faith. Arjun decides to marry Lisa anyway. As he travels to Mumbai, his father and his brothers intercept his car, beat him up, and try to burn Lisa alive. Arjun fights back and decides to disavow his faith and his family for Lisa. He ultimately becomes an atheist.

The project of the manor house is handed to Arjun's firm, and Arjun and Lisa arrive at the house soon after. Arjun is unaware of the strange things happening, such as objects moving by themselves, but Lisa senses a malevolent presence. She questions Balwant, the caretaker, but he feigns ignorance. Balwant privately pleads with MK to relieve Arjun and Lisa of the project for it will claim their lives just as it killed the others before them. The mansion does not wish to be destroyed, and that is why it reacts to anyone who wants to tear it down, including MK. Balwant himself is unharmed because he is only acting on orders and does not carry an intent to destroy the house. MK is aware of the evil presence but silences Balwant with a bribe.

Arjun leaves for Delhi on a business trip, leaving Lisa alone in the house. She experiences stronger supernatural events, and confides in a local church priest. The priest arrives at the mansion and immediately senses a strong evil presence. Later that evening, in his church rooms, he wakes up to find a Baphomet drawn in blood on a wall. He consults with the head priest and they quickly conclude that an evil spirit resides in the mansion and is specifically targeting Lisa. The priest returns to issue a stern warning for Lisa. Lisa is away, and Balwant takes the message, but does not mention it to Lisa.

Arjun returns as Lisa becomes ill, refuses food and water and takes to bed. Arjun spots her eating a dead animal that night, but is unable to make sense of it. The priest attempts to place a cross on Lisa, who turns violent and attacks the priest. Arjun engages a doctor but it turns out to be fruitless as Lisa's evil outbursts and telekinetic attacks simply overwhelm the hospital staff. Now convinced of a supernatural presence, Arjun storms into MK's office and demands the truth. MK reveals the name of the previous owner of the mansion, Radhama, and Arjun visits her in Nawanagar.

Radhama reveals that it started in 1857, during the Revolt of 1857, when she was a servant at the mansion. A wounded mutineer, Mohan Kant, sought cover at the mansion but turned out to be a spy for the British forces. The owner's daughter, Gayatri, seduced him to buy time until her father who was also a freedom fighter arrived. Her father and his men hanged him. He died looking Gayatri in the eye and vowing revenge. His soul has remained in the mansion ever since. Gayatri died on 18th November 1896, and Lisa was born the same day.

At the mansion, the soul of the treasonous soldier has now completely possessed Lisa's body. The priest decides to perform an exorcism. The ritual begins well, but the evil soul is too powerful for the inexperienced priest, and the priest and Balwant are both killed. The evil spirit impels Lisa to slit her wrists. so as to die, and eject her soul from her body so he can carry her soul with him to hell. Unable to physically restrain Lisa, Arjun is forced to reexamine his lost faith. Lisa, empowered by the evil soul, beats Arjun badly and emotionally tortures him. Soon Arjun feels that only God can save Lisa.

Arjun limps toward Lisa, embraces her with all his might and begins reciting the Hanuman Chalisa, torturing the evil spirit. He tries to run but Arjun holds Lisa's body tightly. After some time, the spirit is in pain from the words and is finally expelled from Lisa's body and destroyed. Gayatri's portrait is removed and sent away from the mansion.