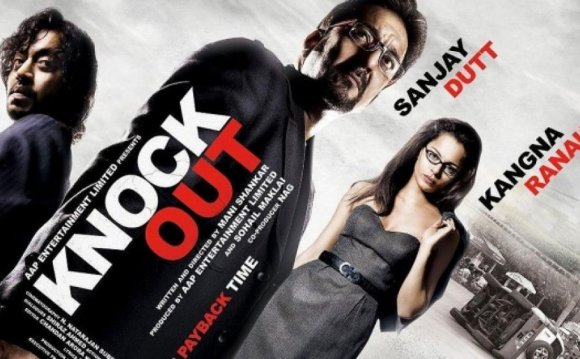 An old joke about Indian politicians goes that a corrupt politician isn’t one who takes bribes.

In Knock Out, writer-director Mani Shankar takes the 2003 thriller Phone Booth and marries it with a plot about getting back approximately Rs 60 lakh crore that corrupt politicians have siphoned out of India and stored in Swiss banks.

If Mani Shankar had faithfully copied Phone Booth, we might have had a reasonably diverting thriller but his original additions, which echo the vigilante justice angle of A Wednesday, reduce Knock Out to a cartoon.

After all, how seriously can you take a film in which Kangna Ranaut in alarmingly pouting lips, high heels and sexy suit plays a television news journalist and director Apoorva Lakhia, sitting in a high-tech van, plays a deadly encounter specialist.

Poor Irrfan, wearing strange curls, mostly cowers in the booth while Sanjay Dutt, playing the super-smart sniper, handles high-tech weaponry and moves up and down buildings with the ease of Spider-Man.