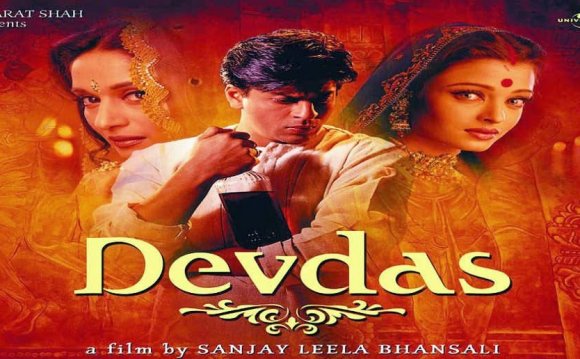 DevdasIs a 1955 film directed by Bimal Roy, based on the Sharat Chandra Chattopadhyay novel. The film had Dilip Kumar in title role, Vyjayanthimala in her first dramatic role where she played as Chandramukhi, hooker with a heart of gold and Suchitra Sen in her Bollywood debut as Parvati in the lead. While Motilal, Nazir Hussain, Murad, Pratima Devi, Iftekhar and Shivraj playing other significant role with Pran and Johnny Walker in extended cameo appearance.

In 2005, Indiatimes Movies ranked the movie amongst the Top 25 Must See Bollywood Films. Devdas was also ranked at Number 2 on University of Iowa's List of Top 10 Bollywood Films by Corey K. Creekmur. The film was also noted for its cinematography and lighting under Kamal Bose that enhanced the emotional torment of the tight-lipped protagonist played by Dilip Kumar.

Set against the backdrop of rural Bengal during feudal times, Devdas is a young man from a wealthy Bengali Brahmin family in India in the early 1900s. Paro alias Parvati is a young woman from a middle class Bengali Brahmin family, but belonging to a slightly lower status in terms of caste, affluence and status. The two families lived in a village, and Devdas and Paro were childhood friends.

Devdas goes away for some years to live and study in a boarding school in the city of Calcutta (now Kolkata). When, after finishing school, Devdas (Dilip Kumar) returns to his village, Paro (Suchitra Sen) looks forward to their childhood love blossoming into their lifelong journey together in marriage. Of course, according to the prevailing social custom, Paro's parents would have to approach Devdas' parents and propose marriage of Paro to Devdas as Paro has longed.

When Paro's grandmother (Sarita Devi) makes the proposal to Devdas' mother (Pratima Devi), the latter rejects her. To demonstrate his own social status, Paro's father, Nilkant (Shivraj) then finds an even richer husband for Paro.

When Paro learns of her planned marriage, she risks her honor to meet Devdas at night, desperately believing that Devdas will quickly accept her hand in marriage. Devdas meekly seeks his parents' permission to marry Paro, but Devdas' family was against him.

In a weak-minded state, Devdas then flees to Calcutta, and from there, he writes a letter to Paro, saying that they were only friends and there was no love between them. But soon realizing his mistake he goes back to village and tells Paro that he is ready to do anything needed to save their love.

By now, Paro's marriage plans are in an advanced stage, and she declines going back to Devdas and chides him for his cowardice and vacillation. Parvati's marriage is finalized with a wealthy zamindar and widower (Moni Chatterjee) with children older than his young second wife-to-be.

In Calcutta, Devdas' carousing friend, Chunni Babu (Motilal), introduces him to a courtesan named Chandramukhi (Vyjayanthimala). Devdas takes to heavy drinking at Chandramukhi's place, but the courtesan falls in love with him, and looks after him. His health deteriorates because of a combination of excessive drinking and despair of life—a drawn-out form of suicide. Within him, he frequently compares Paro and Chandramukhi, remaining ambivalent as to whom he really loves.

Sensing his fast-approaching death, Devdas returns to meet Paro to fulfill a vow that he would see her before he dies. He dies at her doorstep on a dark, cold night. On hearing of the death of Devdas, Paro runs towards the door, disregarding "purdah", but her family members prevent her from stepping out of the door.

The movie powerfully depicts the prevailing social customs in Bengal in the early 1900s, which are largely responsible for preventing the happy ending of a genuine love story.

Dilip Kumar was the first choice of Director Bimal Roy for Devdas. However, he wanted Meena Kumari as Paro, and Nargis as Chandramukhi. But, Meena Kumari could not do the role because her husband Kamal Amrohi laid down certain conditions, which Bimal Roy did not agree with. Nargis refused to do the role of Chandramukhi as she wanted the lead role of Paro. Then the team approached Bina Rai. She refused, too.Suraiya, too, wanted Paro's role. Having no choice they had to take the rising superstar Vyjayanthimala as Chandramukhi. According to the Script writer Nabendu Ghosh "I did not approve of Vyjayanthimala [as Chandramukhi], but we had no option - no one wanted to play Chandramukhi, and we were committed to our distributors. We were in dire straits, and Bimalda's unit was big. He never compromised in the making [of his film]. That meant expenses. And we needed money."

The Soundtrack of Devdas consists of ten songs composed by Sachin Dev Burman and the lyrics were penned by the veteran poet/lyricist Sahir Ludhianvi.Some of the songs were inspired from the Baul tradition. Apart from this it also features some Thumris at Chandramukhi's place as to demonstrate Tawaif culture.