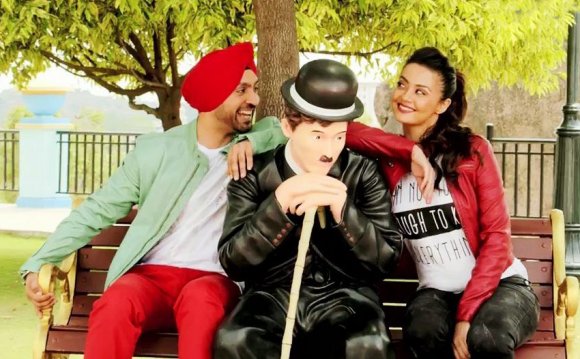 Punjabi actor and singer Gippy Grewal along with comedian Gurpreet Ghuggi visited the city on Tuesday to promote their Punjabi movie Bhaji In Problem.

The movie is also the first Punjabi film in which Bollywood actor Akshay Kumar will be seen with Ragini Khanna, popular as Suhana of Sasuraal Genda Phool serial.

The cast visited Gujranwala Guru Nanak Institute of Management & Technology, DD Jain Memorial College for Women and SEO Bridal Studio. They enthralled the students at both colleges with their hilarious comic acts and foot-tapping numbers.

Talking to the media, Grewal said, "The movie is a comical tale of two friends. Sundeep Cheema, played by Ghuggi, is married to two women. Keeping them ignorant of each other's existence has been something of a challenge. Now his finely balanced life is thrown into jeopardy with the arrival of old friend Jeeta, played by me, who promptly falls for the lovely Preet, played by Ragini. What follows is total confusion."

B N Sharma and Om Puri will also be seen in the movie along with cricketer Harbhajan Singh. It is slated for release on November 15.