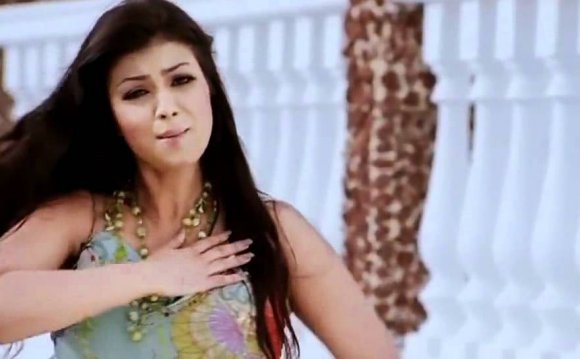 Raveena Tandon: Akshay Kumar and Raveena Tandon set the screens on fire with their chemistry in the song from the 1994 superhit film Mohra. Raveena bowled over her fans in a sexy yellow saree and her dance moves. The beauty of the song was also the crackling chemistry between once real life lovers Akshay and Raveena. Raveena's instinctive sexuality adds charisma to her screen presence. Dancing in the rain and doing enthralling steps with Akki brings attention to her curvaceous outline draped in a yellow saree.

Manisha Koirala: Though this film had a serious subject and a superbly talented star cast, the film 1942- A Love Story was most talked about. Manisha Koirala's innocence added charm to the song and her look. The actress looked pretty and sensuous in the traditional vintage look. Manisha and Anil Kapoor were seen in this mushy rain song -'Rimjhim Rimjhim'. Manisha's beauty and her chemistry with Anil was like an icing on the cake.

Kareena Kapoor: She is currently one of the most glamorous actresses of Bollywood. She's fashionable and is mostly seen playing roles that are glamorous. However, through Chameli the actress took a challenge to play a sex worker. She worked really hard on her looks and make-up. Looking at her in this song, one can easily say that Bebo has done full justice to the song. Kareena was at her best as a seductress wearing a bright red saree with a blue blouse against the beats of 'Bhaage re mann' from Chameli.

Sushmita Sen: Sushmita Sen's last memorable appearance is when she played a sexy, sophisticated teacher with a weakness for sarees and vibrant prints in Farah Khan's Main Hoon Naa. The actress sizzled in each and every scene of the film. But it was this saree song that took the audeince's breath away. Her attractive body and sensuous dance in the song 'Tumhe joh main ne dekha' with the king of romance Shah Rukh Khan, became a huge rage.

Zeenat Aman: From dancing around on the roof to enjoying the rain on a swing, the sizzling Zeenat Aman did all sorts of craziness during her seductive rain dance, 'Hai hai yeh majboori'. The actress looked absolutely gorgeous drenched in a floral orange saree. The wet orange saree and blouse, complemented Zeenat who is one of the most sensual actresses ever to be seen on screen. Her oomph factor was an added advantage to the song and it is still remembered by movie goers.

Dimple Kapadia: Dimple, who won millions of hearts with her debut film Bobby took a sabbatical from Bollywood soon after the release of the film. Her fans craved to see her on-screen and their dreams came true when Dimple decided to return with the film Sagar. The actress paints the screen red with her glowing skin and a tease with a blouse having multiple strings, in the song 'Jaane do na.'

Sridevi: 'Kaate nahi kat te' from Mr India shows Sridevi's brilliant dance movements in a clingy blue chiffon saree. Alisha Chinai's sensuous vocals contributed to making the song an ultimate seductive number. This sensuous song is still fresh in the minds of viewers. Audiences from all generations still find this song as one of the hottest songs of Bollywood.