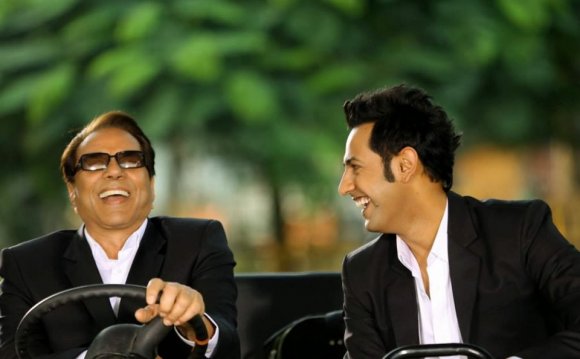 When it comes to Indian cinema, the importance of music can not be underestimated. Having a hit soundtrack or that one stand-out song can make or break a movie. Digital Spy sifts through club anthems, romantic ballads and Punjabi wedding songs to find the ten best Bollywood tracks of 2014.

10. Priyanka Chopra: 'I Can't Make You Love Me'
It's not strictly Bollywood, but don't throw the rule book at us. Chopra's electro-pop cover of Bonnie Rait's 1991 hit has dancefloor smash written all over it. Announced as the star's debut UK single, the track seemingly released everywhere else but here. Fingers crossed that 2015 delivers us PC's long-awaited full album.

9. Yaariyan: 'Sunny Sunny Yaariyan'
Yo Yo Honey Singh opened the year on a high with this repetitively infectious party song from January. A video that looks like it's been lifted from Sabrina's 80s back catalogue may have helped the track in notching up 11 million YouTube views.

8. Queen: 'London Thumakda'
The opening song from Kangana Ranaut's Queen is nothing short of a rousing big fat Punjabi wedding tune that's also cool enough to get down to in a club. Amit Trivedi fuses dhol beats and folk vocals without forgetting to crank up the BPM.

6. Humpty Sharma Ki Dulhania: 'Saturday Saturday'
Varun Dhawan and Alia Bhatt get their groove on in full military drag for this once a week rave synth affair. Nice to see a rise in Dhawan's cool quotient since his Nottingham Trent University clubbing days.

Usually reliable auto shipping companies respect the transit times agreed upon in the contract. However, auto shipping times can sometimes be affected by traffic incidents or bad weather. When choosing a company and agreeing on the terms, make sure to find out if any clauses of reimbursements in case of delays are included in the contract.