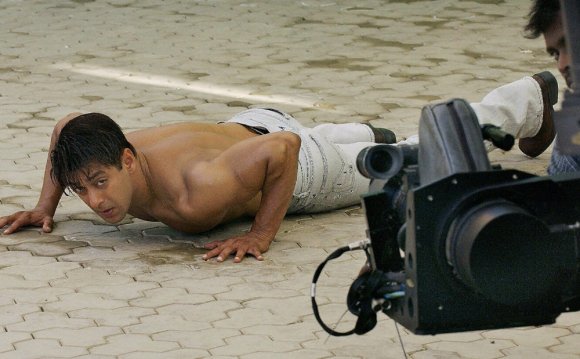 The anticipation for the much-awaited film Bajrangi Bhaijaan continues to grow as the release date draws close. The film title is a regular on the Twitter trends these days, and it is quite evident that Salman Khan fans across the globe can no longer wait to catch a glimpse of the film. And more importantly, their favourite actor, who will be seen on screen after an entire year.

It is obvious that by now, most of us have already come to know the gist of the story. But what new has Salman Khan done for the film? What makes Bajrangi Bhaijaan so special for the actor?

Let's take a look at the things that Salman Khan has done / will be doing for the first time with Bajrangi Bhaijaan.

While Salman had wanted to take his Dabangg to the Kashmiri landscapes, the actor could never see his wish materialise back when that film was being shot. But Salman's Bajrangi Bhaijaan did reach The Valley. The star's first film in Kashmir in his career, Bajrangi Bhaijaan was shot in Pahalgam and Sonamarg. The film was also the first to be shot inside the Ashmuqam Dargah in Kashmir, which has never allowed any shooting within the premises earlier. Salman was quoted as saying, "If you have not seen Kashmir, you have not seen anything', and had a wonderful 45-day stay in the place. In Kashmir, Khan was almost always surrounded by his fans. Salman immediately hit it off with the locals; so much so, that the actor now wants to return to the valley and screen the film for his well-wishers there. For Salman, "Switzerland has nothing better to offer by way of outdoor locales in comparison to Kashmir."

RELATED: Salman Khan to appear on Chhota Bheem & Roll No 21

Political ties between India and Pakistan may be on the bounce, but as far as Salman Khan's fans are concerned, India-Pakistan relations transcend all barriers. The actor has planned to show his love to his fans across the border by deciding to hold a special screening of the film, and guess what ... the actor is even ready to make his first visit to the country! As of now, reports suggest that the film's release might get delayed in the neighbouring country due to its clash with two big Pakistani tickets (Bin Roye and Wrong No.). However, given Salman's popularity in Pakistan, it is taken for granted that the success of Bajrangi Bhaijaan will in no way be hampered.

Bollywood superstars Shah Rukh Khan and Aamir Khan have done their bit to support the actor as far as Bajrangi Bhaijaan is concerned. Now, it is Salman's turn to reciprocate their friendly gesture. Yes, after Shah Rukh and Aamir were the first ones to release the first look of Bajrangi Bhaijaan on Twitter, Salman decided to arrange for a special screening for the duo. Dabangg Khan is now even looking for a suitable date to bring his friends together. However, while Shah Rukh is busy with the shooting of Dilwale and Aamir is gearing up to begin his shoot for Dangal, whether we are able to see the three Khans together is something that only time will be able to tell.

In the song Tu Chahiye, it is for the first time that singer Atif Aslam has lent his voice to Salman Khan. It is said that the actor had decided the singer the moment he heard the song. Composed by Pritam Chakraborty, Tu Chahiye has been shot in Old Delhi. Apart from Atif, Salman also has a song sung by Adnan Sami in Bajrangi Bhaijaan. It is in Bhar Do Jholi Meri, which features the singer, too, that Salman has worked with the Pakistani singer for the first time.

Salman's first movie with Kareena Kapoor Khan after her marriage

After a span of four years, Salman Khan is all ready to share the screen space with co-star Kareena Kapoor Khan. While the duo was last filmed together in Bodyguard (2011), which in no time had then set the box office on fire, they were also seen for a few minutes in Dabangg 2, when Kareena had been roped in for the song Fevicol Se. This Eid, the Salman Khan-Kareena Kapoor Khan jodi is back to recreate the magic in